Seeing Your Name up in Likes

The real prize is making a difference 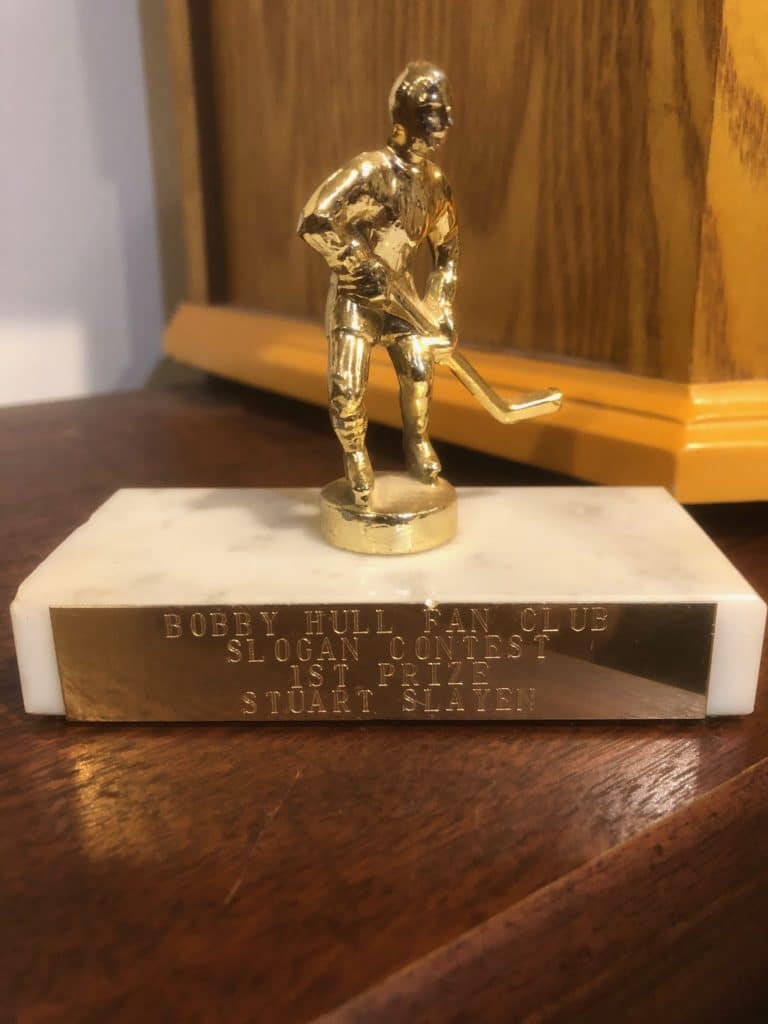 The trophy arrived in one of those obscenely messy shipping envelopes in the dark days before bubble wrap. I tore it open with the excitement of a nine-year-old. Grey dust and coloured flecks made of Lord-knows-what flew everywhere, but I didn’t care. I had just won a writing contest.

As a young hockey fan in Manitoba, I was star-struck by Bobby Hull—the Golden Jet—who had been lured from the National Hockey League to play with the Winnipeg Jets of the World Hockey Association. I joined a Bobby Hull fan club run out of Chicago where Hull had established himself as a hockey superstar. In one of its typewritten newsletters, the fan club announced a Bobby Hull slogan contest. I entered and won. It was the greatest moment of my life.

I stumbled upon the trophy in April during some quarantine-inspired house decluttering. I don’t remember the winning slogan and I suspect it was never used for anything, but finding the trophy reminded me of how exciting it was at the age of nine to have someone like my writing.

It’s still nice to have people like what I write, but in business writing and non-profit organizational writing, that should not be the primary goal. My primary goal is to use story and writing to change a life, change a mind, build a relationship, inform a discussion, or inspire a decision to act or not to act—all consistent with a client’s strategy and objectives.

That idea became crystal clear to me very early in my career when I was working as the editor of What! A Magazine, a national publication for Canadian teens. I had written an article about teen suicide from the perspective of a father who had lost his son. A few weeks later, I received a handwritten, unsigned note from a reader thanking me for writing the article because it saved their life. The young reader had been contemplating suicide but changed their mind after reading what I wrote. I remember shedding a few tears in my office when I read the letter. And I remember being awestruck by the power of words and the power of story to make a difference in a reader’s life. Winning the slogan contest years earlier didn’t seem like such a big deal anymore.

When I look back on that cathartic moment, I know now that was when I started to mature as a writer. I learned in that moment that the writer matters less than what is written. Much less.

When a case-for-support document I’ve written helps generate a multi-million dollar gift; or when a newsletter article inspires an unsolicited six-figure donation; or when a presentation I’ve helped to develop cements investor confidence in a business; or when a ghostwritten speech helps to renew an audience’s enthusiasm for an organization—these are the trophies I seek today. These are the trophies all business and organizational writers should seek. A reader might like your clever turns of phrase or your riveting descriptions of an event—and that’s a good thing—but if the tone, style, pace, and content don’t inspire action, then being simply liked doesn’t matter a great deal.

We all enjoy having our work liked (hey, I kept the silly trophy, didn’t I?), but when writing for a business or a non-profit organization, let’s aim higher. Much higher. Before your fingers hit the keyboard, engage deeply with your clients, employers, and other stakeholders to learn what will move the intended audience to respond. Look through the lens of strategy, impact, meaning, and precedent and then write something that people will read or listen to from beginning to end and then act the way you want them to.

I hope you act on this idea. And I hope you like it, too.